Bharata Mata College is a nationally accredited first grade arts and science co-educational institution of higher learning in the aided sector, under Bharata Mata Educational Trust owned and managed by the Archdiocese of Ernakulam-Angamaly. Established in 1965 by His Eminence the late Joseph Cardinal Parecattil, the college is affiliated to the Mahatma Gandhi University, Kottayam. The college was included under section 2 (f) and 12 (b) of UGC Act 1956 in 1976 and accredited at the A+ level by NAAC in 2019.

The college is located in Thrikkakara, Kerala’s mythological capital, facing the Seaport –  Airport Road. Situated at a distance of just 12 Kms from the city of Kochi, it is easily accessible from Judgemukku on Edappally-Muvattupuzha Road in the North, and from NGO Quarters and Palli stop on the Kakkanad -Ernakulam Road in the South, in addition to the BMC bus stop on the Seaport-Airport Road. The CUSAT, NPOL, Model Engineering College, Ernakulam District Collectorate, lnfopark and CSEZ are the important neighbouring landmarks of the college.

Bharata Mata College is a vision conceptualized by  its Founder Patron Cardinal Parecattil for a centre for advanced learning for the economically deprived, socially downtrodden and educationally disadvantaged sections of the then underdeveloped Thrikkakara and its rural community which comprised of  the minority communities, namely a majority of Muslims, some Christians and Dalits. The establishment of the college was the realization of a long and elusive dream of the people of the locality for a higher education institution in the lap of Thrikkakara Panchayat.

Thrikkakara, which is referred to as the mythological capital of Kerala,  is believed to be the place where Lord Vishnu put down his foot as Vamana ( ‘Thiru-kal-kara’= The Land of the Holy Foot),  according to  Kerala’s own  legend of Onam. The College is situated close to Kakkanad ( ‘Kalkal-nadu’= Land at the Feet ), erstwhile capital of ‘the land surrounded by the seas on three sides’ ( Kerala),  as mentioned in ancient historical accounts of Ptolemy, Megasthenes etc. These stories,which are  intertwined with fact and fiction, and imbued with the myth and mystery of the place, is  in  tune with the rich heritage of Bharata Mata College .

The College was inaugurated on 5 July, 1965 by the District Collector of Ernakulam Sri. Ramunni Menon and blessed by His Grace Cardinal Parecattil, the Archbishop of Ernaakulam. Bharata Mata  had its humble beginnings as a junior college, with five Pre-degree batches quartered in a four  storeyed building (with separate verandhas for boys and girls), a Retreat house, a small canteen, a hall and a garage.  There were two college buses, with a mesh separating boys from girls, since no buses were plying to this underdeveloped area with its mud roads and potholes.Other than the legendary Thrikkakara temple, and the upcoming structure for the  Cochin University, Bharata Mata College was the only institution in the sparsely populated rural landscape of Thrikkakara, with its sprawling  cashew trees and  brush woods and brambles spread over the barren hills,  and the dry lands stretched into the valleys, with  coconut and arecanut trees scattered few and far between.

Two-day job fair in city
TNN / Jan 08, 2022, 04:09 (IST)
The district administration will conduct a mega job fair at BHARATA MATA COLLEGE, Thrikkakara, on Saturday and Sunday. Industries minister P Rajeeve will inaugurate the function, which will be presided over by Hibi Eden MP.

The College has various national and international collaborations.

A person, who has passed Higher Secondary/Intermediate (10+2) any other examination recognized as equivalent thereto, shall be eligible for the course. 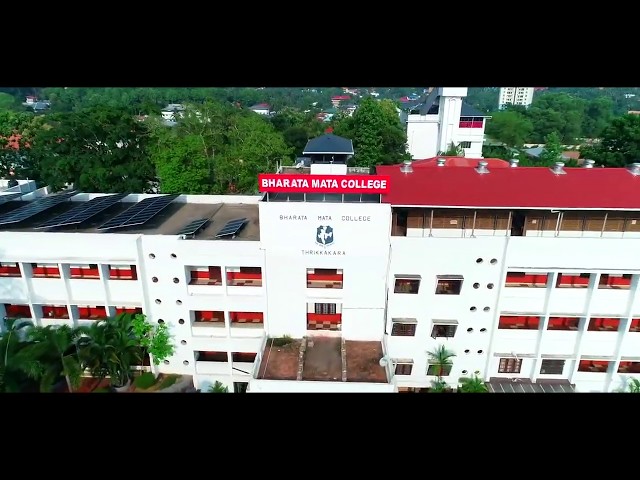